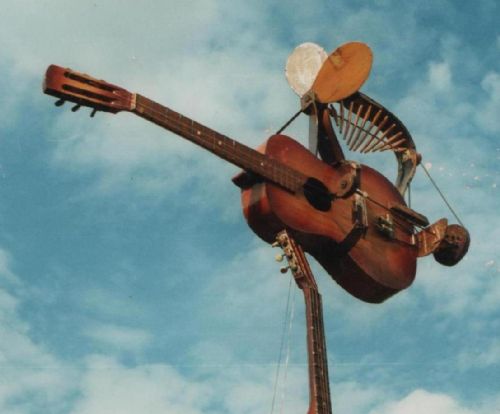 The guitar played by the wind 1991

The kinetic sculpture ‘Guitar Played by the Wind’ is an older work by Chris Dobrowolski. It shows exactly from which perspective Dobrowolski makes his art. As soon as the wind gets a hold of it, the guitar begins to play. The work was inspired by Ennio Morricone’ssoundtrack to the film ‘The Good, the Bad and the Ugly’– Particularly the minimalistic guitar music heard in the final gunfight scene at the end of the movie.

With this sculpture, Dobrowolski wanted to capture the synergy between music and landscape, as is the case with many Westerns: simple but intense. Yet, instead, it produces only a mechanical two-string strum. With this work, Dobrowolski shows the humor and cynicism that are so characteristic of his artworks. As an art student he and two musical friends had dreams of forming a band. Although one friend went on to become a successful pop star for Chris the dream popped like a balloon. Failure and disappointment are a constant preoccupation and source of inspiration for his work.